Statement on the Supreme Court Challenges to ICWA 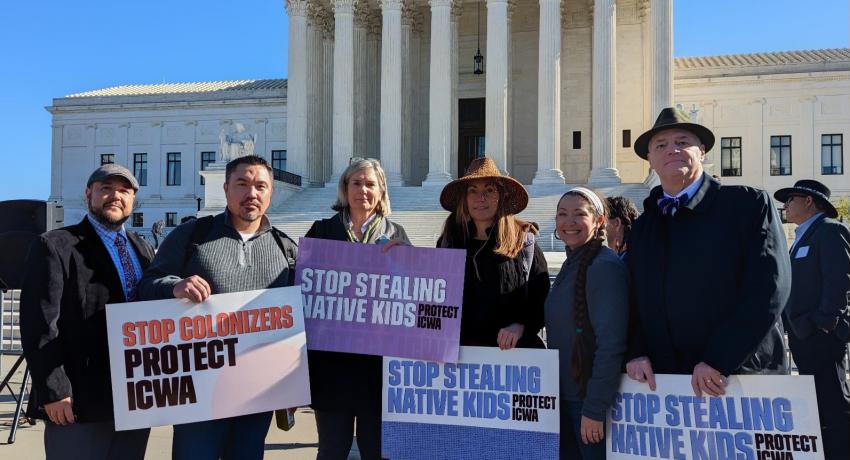 Today, the U.S. Supreme Court is hearing challenges to the constitutionality of the Indian Child Welfare Act.

The law, in place since 1978, recognizes the history of disproportional removal of American Indian/Alaska Native (AI/AN) children by state child welfare agencies, and tribal governments’ right to protect families and ensure AI/AN children continue their upbringing within their homes, traditions, and cultures. At that time, some 25 to 35 percent of AI/AN children had been placed in adoptive homes, foster homes or institutions -- the majority placed with non-native families.[i]

The Indian Child Welfare Act, the gold standard for ensuring that AI/AN children retain opportunities for permanence with tribal community, kin and family, is under threat by challenges made through the Brackeen v. Haaland case this week.

We stand shoulder to shoulder with tribal governments across the nation. As representatives of Washington’s tribes, the Washington State Governor’s Office, the Washington State Department of Children, Youth, and Families, and standing with the National Congress of American Indians, Native American Rights Fund, and National Indian Child Welfare Association, we reject the challenges to this fundamental human rights law and the attack on tribal sovereignty.

We will never willingly return to a time when children were routinely ripped from their families and cultures. We will not return to the boarding school and racist era that is within living memory and personal experience for our friends among the tribes in the Northwest, Canada, and the entirety the United States and nations contained within its territory.

There is history, but also current challenges. Today, in Washington State, we still see disproportionality in the numbers of Indian children who enter our child welfare systems[ii]. We hope the court will see that supporting barriers to return to the culture and communities these children know best is wrong, backwards, and counterproductive.

We disagree with the notion that this case should have even proceeded to the Supreme Court. Given the potential for damage to Indian child welfare, we will stand firm in our resistance to weakening of tribal sovereignty. The Indian Child Welfare Act was conceived to protect Indian children and families and cultures throughout the country. Together, we will work to protect this Act for the benefit of children, youth and families.

[ii] https://www.dcyf.wa.gov/sites/default/files/pdf/reports/CWRacialDisparityIndices2019.pdf; as well as internal data pull from DCYF Office of Innovation, Alignment and Accountability.