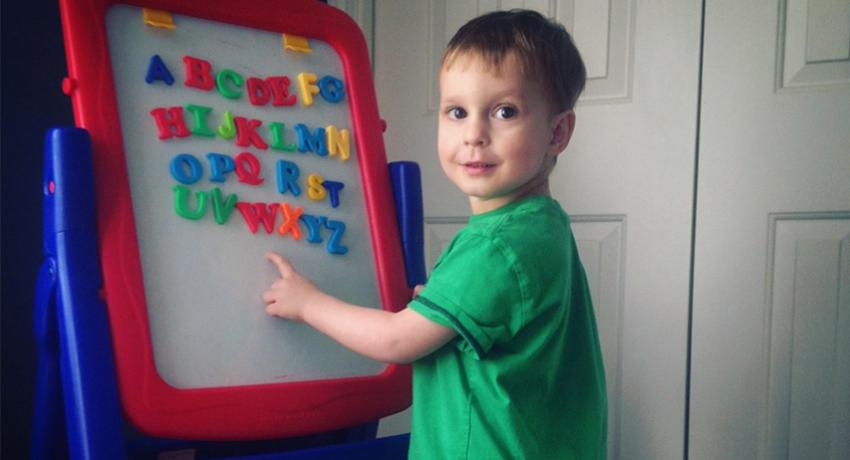 Talon was born with Autism Spectrum Disorder. He was largely nonverbal, making no gestures and limited eye contact. Talon’s services with Kindering – the largest Early Support for Infants and Toddlers (ESIT) program in the state – began when he was 18 months old. He had regular home visits from Kindering Speech Language Pathologist Rachel, who quickly became Talon’s favorite playmate and an irreplaceable resource for his mother, Michelle. Michelle remarked over Kindering’s breadth of services and focus on the whole family. Having navigated a patchwork early intervention system in California with two older sons who have special needs, Kindering’s ability to diagnose in-house and coordinate full-scope care blew her away.

“They even involved his brothers in how to help,” Michelle recalled. She also remembers being stopped in her tracks when for the first time ever she was asked: “How are you doing?”

“They care about you, your child and your whole family. They provide a sense of security for parents,” she said. “The whole-scope care and communication between Talon’s providers eliminates the scary game of wondering where to go and what to do next when you receive your child’s diagnosis.”

Talon attended Kindering’s inclusive Stepping Stones preschool, and at 20 months he joined CUBS, Kindering’s program specialized for children on the autism spectrum. Michelle watched Talon’s skills skyrocket. But living near Renton, driving to and from Bellevue almost daily was all-consuming.

“It was well worth it, but it was a huge drain,” she recalls. When Kindering Renton opened, the family immediately enrolled in Stepping Stones there. “It was a life-saver,” says Michelle. “Having Kindering nearby and in your own community makes all the difference for families who are already under great distress.”

Talon thrived and continued receiving educational, occupational therapy and speech services at home too. Rachel identified that Talon is hyperlexic, meaning that he is able to read and spell well ahead of what would be expected for his age. At the time of his graduation from Kindering at age three, after only 18 months at Kindering, Talon was reading at a 3rd-grade level.

“Kindering has always met us where we’re at, in every sense,” says Michelle. “They have stepped up for our family and for the community, and harnessed Talon’s strengths to truly let him soar.”

When Talon graduated and transferred to the school district, the Special Education coordinator made sure she was at the meeting between the school district and Michelle’s family so that she could provide insight and make sure Michelle felt safe and supported.

“A year after leaving Kindering, our providers are still invested in Talon’s progress. We send them videos and they love to see him doing so well. Kids can tell when someone really cares for them, and these providers all truly care for Talon, but also for our family.”