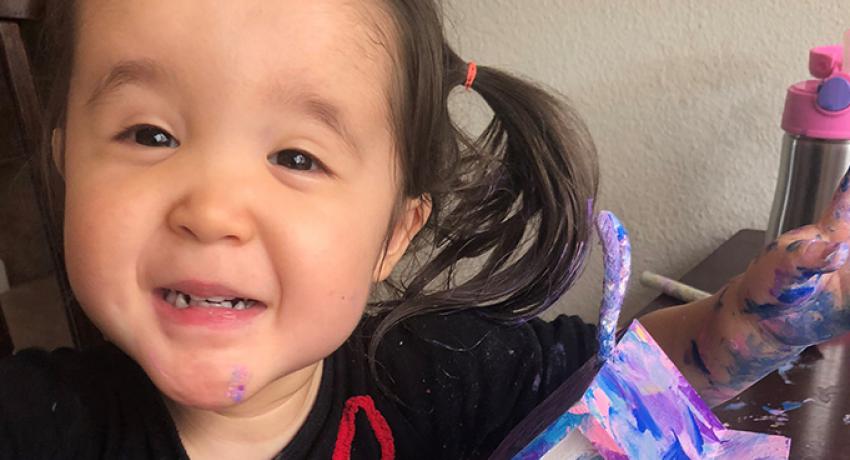 Opal was born full-term in April 2018. Everything appeared to be perfect at first, and her parents, Jessica and Derek, were thrilled to welcome their first child into their family. However, shortly after she was born, Opal's doctor had some concerns and raced her to the Neonatal Intensive Care Unit (NICU). Her parents learned that Opal would need surgery on her bowel at just three days old. During the next couple of weeks, while she remained in the NICU, Jessica and Derek learned that Opal also had hearing loss in one ear.

With the combination of the hearing loss and the bowel surgery, Opal’s doctors were looking at clues for what else to keep an eye on, like low muscle tone. Opal’s pediatrician connected the family to Kindering – the largest Early Support for Infants and Toddlers (ESIT) program in the state – to address the physical and motor delays that were being identified before they were able to find a diagnosis for her. Opal’s developmental evaluation was held in the family’s home when she was about two months old.

"They were here from very early on and are a huge part of Opal’s life. Kindering really earned my trust with their holistic approach. They not only know my child, but they know us as a family, how we operate, the rhythms of our house," says Jessica. "They’re looking at everything, from physical attributes to anything that could impact that; whether that’s eating, speech, physicality, cognitive abilities…That’s where Kindering really helps to close the loop and brings it all together in a way that parents can understand it."

In her time at Kindering, Opal has received physical and speech therapy and has attended Co-Op group class with her dad. She has thrived in therapy!

"Without the guidance from physical therapy at Kindering, we wouldn’t really have a gauge to go by," says Derek. "They told us what we can work on with her to reach these milestones for both feeding and physical therapy. This kind of gave us comfort while we waited for her diagnosis."

When Jessica and Derek finally did get Opal’s diagnosis of a very rare genetic condition, there was very little known about it. Opal was diagnosed with 15Q-24 Microdeletion, of which there are around 30 known cases worldwide.

"She might be in a wheelchair, she might not be able to walk or run or anything – that’s what we were told at the genetics appointment," Derek remembers.

Now Opal is walking and running and tumbling over her own legs. Jessica is thrilled to say that some of Opal’s biggest wins are that she is walking, talking, she’s social, and is just a genuinely happy child.

Derek says, "I don’t know where Opal would get to by 3 without Kindering. The therapy is huge for her but it’s also teaching us what we can do on a daily basis."

"They’re really helping to build the foundation of your child’s life. It’s so important that every child has an equal opportunity to reach their potential, whatever that might be," says Jessica. "I just think it’s in everyone’s vested interest to make Kindering the best it can be for everybody. They close gaps, it’s what they do. We’ve seen it in our child’s development. From our expectation of what was possible to what is now possible, it’s amazing."